Twas our first time to try out the GO Budget Hotel while waiting for our flight back home to Manila (the next day) from Tacloban City, Leyte. We were with Henry Ocier and Janice Gan of our Grupo Da Imaculada (GDI) Pilipinas group. Earlier, we dropped off Thelma Siao of GDI Ozamis and Ivy Go of GDI Cebu.

We actually tried out two others before this: Asia Star Hotel in downtown Tacloban and Hotel Alejandro along Paterno Street. Although, both had much lower rates at P1,100 per room overnight, they appeared gloomy and uninviting. Asia Star was worse … old and drab, smelled bad, beds were askew. The only advantage was it was in downtown where you could just step out of the hotel to a variety of food choices and experiences. Hotel Alejandro was more of a heritage place with a modern feel. The rooms appeared cramped though, and it was outside of the commercial area — few choices where to eat nearby without taking a ride.

Go Hotel was our last resort because we were already paying excess hours for the van we rented for 24 hours. It was highly recommended by our driver, Edwin. It was a big disappointment however when we were told at the counter that what was priced at P1,100 over the phone an hour earlier was now P1,555 — due to a Revenue Management System supposedly. Hesitantly, we were forced to check-in despite the P400+ difference.

If we came in another hour later, the rate would have been P1,700 already. So you can say, we were still blessed.

The GENERAL AREA or public area shared by those who check into this best value hotel. 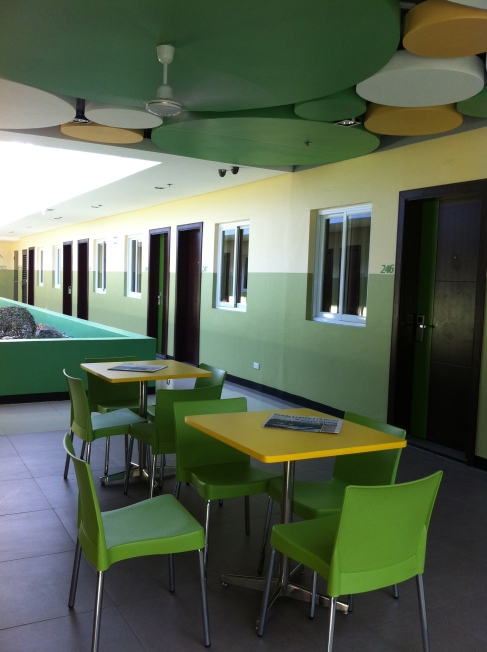 All units were at the second floor thru a separate entrance in the mall building. The hallways and general areas were brightly colored and had tables and chairs ventilated by ceiling fans.

ROOM SIZE is about 12 square meters: 9 for the bed area and 3 for the bathroom.

The rooms were pitifully small and claustrophobic — only about 9 sqm for the bedroom and 3 sqm for the bathroom for a total of about 12 sqm. Almost half of the normal room size of a respectable hotel. But this is precisely what their business model is about — just offering the basics for budget travelers. A best value hotel without the frills. That’s what Go Hotel is all about.

It is the cleanest and most sanitary among those we visited, though. It has free wifi in the rooms, too. New Samsung split type aircons and flat LCD tvs with remote. The bathrooms are modern and clean. The place is well-secured. Each room has 3 wall outlets, enough to plug in 6 gadgets all at the same time.

The greatest advantage of GO Hotel is that it is within the Robinsons Mall complex where you have an entire mall for a lobby and coffee shop downstairs.

So, if you are looking for a place to rest after a long day outside the hotel … Go Hotel is just right for you.

But for writers and other creative people who need to work on their laptops while inside their rooms — it is not conducive.

GO!, then . . . if you still have time to look for other hotels to choose from 🙂